You are here: Home / Nyelv / Angol nyelvű / Wedded to tradition: Many hues of henna 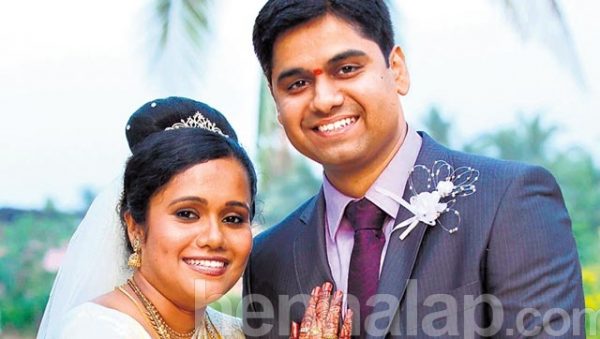 Glory george and her husband Bipin on their wedding day. Theirs was a traditional Malayali Christian wedding, complete with flowing veil and multi-layered cake — but she also had an intricate floral pattern painted on her arms in henna.

There was an unexpected splash of colour when Glory George walked down the aisle. Hers was a traditional Malayali Christian wedding, complete with flowing veil and multi-tiered cake — but she also had an intricate floral pattern painted on her arms in henna. For many in the church, this was a unique touch — they had never seen a Christian bride with henna on her hands.

“I had always dreamed of a church wedding, but I also wanted a mehendi ceremony,” says Glory, 33, a Mumbai-based banker now married three years. “I was inspired by all the fun I have had at my many Punjabi and Marwari friends’ mehendi functions. All my relatives from Kerala loved the idea and a few of my cousins now say they too will apply mehendi on their wedding day.”

Like all traditional wedding mehendi, George’s had her husband Bipin’s name spelt out amid the flowers, jharokas and jaalis that made up the mehendi pattern. She spent part of the wedding night challenging him to find all the letters.

This sense of fun is one of the reasons that the mehendi tradition has survived and is now thriving across borders of community and even religion, with Catholic, south Indian and Bengali brides adopting it and the art form becoming established as far away as Japan.

The glamorous songand-dance mehendi rituals of TV shows and Bollywood movies are, in fact, a key reason for the growing popularity of the tradition, says sociologist Sarla Bijapurkar. “For traditionally mehendi-applying communities such as Marwaris and Punjabis, it was a way for women to come together. Over the years it has become a popular wedding ritual among women across Indian cities, where traditions and rituals have always been fluid,” Bijapurkar adds.

Gupta and Mumbai-based henna artist Veena Nagda, 52, who have been in the business 17 and 24 years respectively, would agree.

“When I started out, it was a seasonal job, with most orders coming in during the Hindu wedding season,” says Nagda, 52. “Now we have work all year round, as we cater to different communities. Mehendi orders from Bengali, Catholic, Maharashtrian and south Indian families now make up about 30% of my business.”

Mehendi as an art form is also gaining popularity in Japan, as both men and women warm up to it as ‘organic tattoos’. “Japan got introduced to henna art at various Indo-Japanese cultural fairs and exhibitions regularly organised in the country,” says Kichiji Kubo, founder of Rakuyukan, a dedicated henna-art school set up in 2006. Rakuyukan has trained a total of 110 students so far.

One of the school’s ten part-time teachers is Indian henna artist Madiha Vahid, 27. She has spent two-and-a-half months in Osaka and Kyoto in 2013 and 2014. “For the Japanese, henna is exotic,” says Vahid. “Henna art in Japan is also popular with pregnant women. They apply henna on their bulging stomachs as they think of it as therapeutic and soothing.”

The Japanese like their mehendi very intricate and very ‘clean’, she adds, laughing. “They will not tolerate smudging at all. And as soon as it is applied, they dry it with a hair dryer and wrap body tape around it to ensure that the grains do not dirty their homes or streets.” 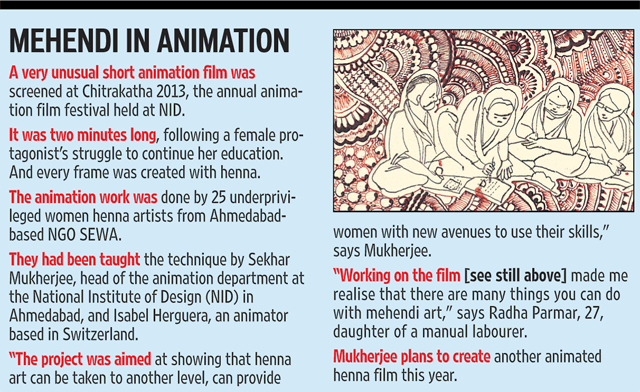 The growing demand for mehendi artists is also serving as a tool of women’s empowerment. In Maharashtra, with no tradition of mehendi, the state government’s Centre for Entrepreneurship Development launched mehendi classes for women in two centres last year. “They had been asking for these classes and the organisation realised the potential of mehendi work to empower women, so we decided to take it up,” says head of co-ordination SK Thote, via e-mail. Elsewhere, it is being used to break caste divides and offer financial independence to women from ultra-conservative communities.

In Alwar, Rajasthan, for instance, the Nai Disha (New Direction) Sulabh Vocational Training Centre for scavengers has been teaching women to apply mehendi since 2008. “The aim was to train these women, considered untouchables, a skill that would not just give them a livelihood but also help them gain respect in their society,” says Suman Chahar, senior vice-president of Nai Disha. So far, 150 women in Alwar and 280 women in Jaipur have been trained.

“Mehendi was traditionally a family affair in Rajasthan. The women folk of the house would apply mehendi to each other. Now, everyone wants to hire a skilled artist to flaunt fancy designs at functions,” says Chahar. For the women, this has helped transform their lives.

“The same people who would not let us sit on their sofas, who would drop stale food into our plates instead of handing it over, are inviting us to their homes during important events like sangeets, serving us chai and snacks and paying us 10 times what they used to,” says Rajni Gandha, 36, from Alwar, who gave up scavenging six years ago to become a henna artist. “I never thought I would see such a change.”