You are here: Home / Nyelv / Angol nyelvű / Lara Bingle shows off her henna tattoo before launch of Being Lara Bingle 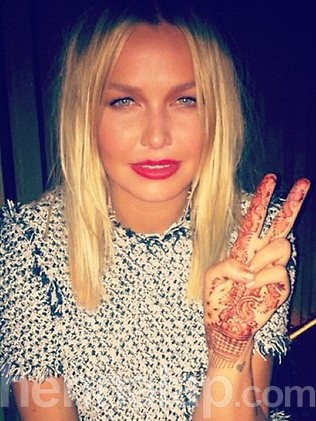 Henna tattoo … Lara Binglwe shows off her ink, meant to bring “inner sun”. Picture: Instagram/Twitter
SOMEONE should tell Lara Bingle she’s not the first person to get a henna tattoo.

Since returning from India this week, the 24-year-old Bingle has been waving around her Mumbai souvenir.

Hopefully the power of the temporary tatt (locals believe they awaken your “inner sun”) shines on her on July 3, when she faces court after allegedly hitting a motorbike rider in her Mercedes.

Josh Bingle – who features heavily in the Channel 10 series based around his famous sister – pleaded guilty to common assault yesterday, with the Downing Centre Local Court hearing the scuffle broke out during Melbourne Cup festivities in 2009.

Bingle was in Melbourne yesterday selling her new TV reality show, which begins next Tuesday, and she was asked by her affair with AFL bad boy Brendan Fevola.

She told FOX FM that she had no regrets about her dalliance with the current Dancing With the Stars contender, saying: “It’s made me who I am today.”

A nude mobile phone photo of Bingle in the shower, allegedly taken by Fevola when they had a brief fling in 2006 while he was married to Alex Fevola, was first published in 2010.

It started a downward spiral for the bikini model, who was at the time engaged to cricketer Michael Clarke.

“As much as I wouldn’t have liked that to happen, things happen obviously along the way and it’s made me who I am today. As much as I could run, hide at that point,’”she said.

“As much as he is what he is and he did what he did, he’s a nice guy to be quite frank. He was a nice guy when I hung out with him.”

She told mX that her new show was a risk.

“But I don’t think I have anything to lose really. My life could be much worse,’’ she said.