Henna leaf extracts have antimicrobial activity on the bacteria responsible for the common skin infections. Alcoholic and oily henna extracts have similar effects to some of the antibiotics commonly used in clinical practice.

Lawsonia inermis (henna plant) has been used in herbal medicine for ages. However, the medical benefits of this plant have been discussed in only a few publications. In this study, the antibacterial effects of water, alcoholic and oily extracts of Lawsonia inermis leaves against bacterial cultures isolated from various skin diseases were investigated and compared with Tetracycline, Ampicillin, Gentamicin and Ciprofloxacin antibiotics. Cultures of Staphylococcus aureus Staphylococcus epidermidis (Co-agulase negative staphylococci or CONS), ß-hemolytic streptococci and Pseudomonas aeruginosa species were obtained from 74 (35 females, 39 males) patients with different skin infections who attended the Dermatology outpatient clinic in Basra General Hospital. The bacterial isolates were treated with L. inermis extracts in vitro. Alcoholic and oily extracts were more effective than the water extract which had no effects using standard method of NCCL, 2000.

Alcoholic extracts had the highest antibacterial activity with a MIC of 0.125-0.150 µg/ml against ß-hemolytic streptococci and against CONS was 0.125-175 µg/ml .Oily extracts had a MIC of 0.25-0.30 µg/ml against Staphylococcus epidermidis (cons). Both alcoholic and oily extracts had the same MIC (0.5 µg/ml) on Staphylococcus aureus. However, alcoholic extracts were more effective on Pseudomonas aeruginosa with a MIC of 0.5-0.57 µg/ml than oily extract (MIC of 0.20-0.28 µg/ml). However, there were no statically differences between the effects of oily and alcoholic henna extracts (p= 0.050).

Introduction
Henna or Hina (Lawsonia inermis, syn. L. alba) is a flowering plant, 2-6m in height. It is the sole species in the genus Lawsonia in the family Lythraceae.1 Henna, Lawsonia inermis, produces a burgundy dye molecule, lawsone.2 This molecule has an affinity for bonding with protein, and thus has been used to dye skin, hair, fingernails, leather, silk and wool. The dye molecule, lawsone, is primarily concentrated in the leaves. Products sold as “black henna” or “neutral henna” are not made from henna, but may be derived from indigo (in the plant Indigofera tinctoria) or Cassia obovata, and may contain unlisted dyes and chemicals.1

It is well known that plants have been used in traditional herbal medicine for many years.3 In some parts of the world, plants and herbs are still the prime medicines used in medical treatment.4–6 L. inermis is widely grown in various tropical regions in Asia, America and Africa. In Arabic, the word “henna” refers to L. inermis.5,7

The main uses of henna are as a cooling agent, astringent, anti-fungal and anti-bacterial herb for the skin and hair.8,9 It has also been used as a dye and preservative for hair, skin and fingernails as well as leather and clothes.8,9 Its core chemical components are 2-hydroxynapthoquinone (lawsone), mannite, tannic acid, mucilage and gallic acid. Out of these ingredients, the main one is 2-hydroxynapthoquinone (lawsone). About 0.5-1.5% of henna is made of lawsone. Its bioactive feature is thought to be due to its high protein binding capacity.2,9

The skin has a complex flora. Infections can result when there is a breakdown in the integrity of the skin or when the immune defense is compromised. Common skin infections include cellulitis, erysipelas, impetigo, folliculitis, and furuncles and carbuncles.10 Many types of bacteria have ability to produce skin infections. Staphylococcus aureus is the most common cause of skin infections. It is frequently found in the nose and skin. About 20% of the population is long-term carriers of S. aureus.11 The purpose of this study was to evaluate the antibacterial properties of henna extracts in vitro and to compare them with Tetracycline, Ampicillin, Gentamicin, and Ciprofloxacin antibiotics.

Sampling
Bacterial isolates were obtained from 74 patients (39 males, 35 females) with different skin infections who attended the Dermatology out patient clinic at Basra General Hospital. Bacterial culturing and identification of bacterial species were done at the Department of Microbiology in the University of Basra using Colle J, et al method, 1996.12

Plant samples and extraction procedure
L. inermis were collected from private gardens in Abu Al-Khasib City in Basra. The leaves were left to dry at room temperature for 24 hours. The dried leaves were ground to a powder and were kept in dry containers. Three types of extract were prepared in the present study: oily, alcoholic and water-based extracts. The oil-based extract was prepared by mixing 50 gm of dried leaves powder of Lawsonia inermis with 500 mL of n-hexane for 24 hours. The solvent was then removed with a negative pressure to make 3 gm of oily henna extract. The alcoholic extract was prepared by mixing 25 gm of henna powder with 250 mL of 70% ethanol for 12 hours. This mixture was cooled and filtered by Buchner funnel and filter paper (Wattman No. 185). The solvent was dried and concentrated using Rotary evaporator at 50°C. Water-based henna extract was prepared in the same way except that distilled water was used instead of alcohol.

Note: One typical species from each bacterial skin infection was selected for the study. The total isolates were 5 for each bacteria study.

2. Comparing efficacy of henna extracts with antibiotics:
Tetracycline, Ampicillin, Gentamicin, Ciprofloxacin antibiotics were used in this study to evaluate the antibacterial efficacy of L. inermis (henna) extracts. Muller Hinton agar was used with different antibiotic concentrations (30 mcg) to measure the (MICs). Determination of MIC was carried out using Maki’s method, 1985.15

Seventy four patients (39 males and 35 females) with various skin infections were involved in this study (Table 1). The studied skin infections were impetigo, carbuncles, furuncles, infected eczema and infected wounds. The isolated bacteria were coagulase-negative staphylococci, Staphylococcus aureus, ß-hemolytic streptococci and Pseudomonas aeruginosa. When measuring the antibacterial activity of henna extracts, alcoholic and oily extracts were more effective than the water based extract which had no effects. The standard method of NCCL were used, 200013

Table 1 – Distribution of skin diseases according to sex 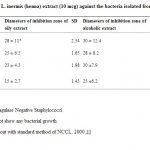 
Alcoholic extracts had the highest antibacterial activity with an MIC of 0.125-0.150 µg/mL against ß-hemolytic streptococci and against coagulase-negative staphylococci was 0.125-175 µg/mL. Oily extracts had an MIC of 0.25-0.30 µg/mL against Staphylococcus epidermidis. Both alcoholic and oily extracts had the same MIC (0.5 µg/mL) on Staphylococcus aureus. However, alcoholic extracts had more effect on Pseudomonas aeruginosa with a MIC of 0.5-0.57 µg/ml than oily extract 0.20-0.28 µg/ml. However, there was no statistical difference with p value ³ 0.05 (Table 3). When comparing the extracts’ MICs with those of antibiotics, alcoholic extracts showed pronounced antibacterial effects against the isolated bacteria in vitro but oily extracts had much similar MICs to those of antibiotics with a statistically significant difference between the effect of extracts and antibiotic p<0.050 (Table 4). [gallery columns="2" link="file" ids="2070,2071"] Discussion
Henna has many traditional and commercial uses, the most common being as a dye for hair, skin and fingernails, as a dye and preservative for leather and cloth, and as an anti-fungal. Henna body art is made by applying henna paste to the skin: the lawsone in the paste migrates into the outermost layer of the skin and makes a red-brown stain. Some pastes have been found to include: silver nitrate, carmine, pyrogallol, disperse orange dye, and chromium. These have been found to cause allergic reactions, chronic inflammatory reactions, or late-onset allergic reactions to hairdressing products and textile dyes.16–18

Henna contains Lawsone in about 0.5 to 1.5% of its ingredients. Lawsone (2-hydroxynapthoquinone) is the principal constituent responsible for the dyeing properties of the plant. However, henna also contains mannite, tannic acid, mucilage and gallic acid.2,9 These substances are present in henna in the form of a mixture. Antimicrobial activity may be due to numerous free hydroxyls that have the capability to combine with the carbohydrates and proteins in the bacterial cell wall. They may get attached to enzyme sites rendering them inactive.2 Water extracts did not show any antibacterial activity compared to alcoholic and oily extracts. This may be due to the lack of the solvent properties which plays an important role in antibacterial efficacy.9

The alcoholic extract showed the lowest MICs compared to other types of extracts and this may be due to the large quantity of active substances that were precipitated during the extraction process due to the effect of Hexane solvent itself.5 When compared with antibiotics, alcoholic henna extracts showed more antimicrobial activity while oily extract had similar antibacterial activity compared to those of antibiotic. We concluded that henna has an in-vitro antibacterial activity against the tested bacterial strains. These findings have also been mentioned in literatures.5–7

Henna leaf extracts have antimicrobial activity on the bacteria responsible for the common skin infections. Alcoholic and oily henna extracts have similar effects to some of the antibiotics commonly used in clinical practice.