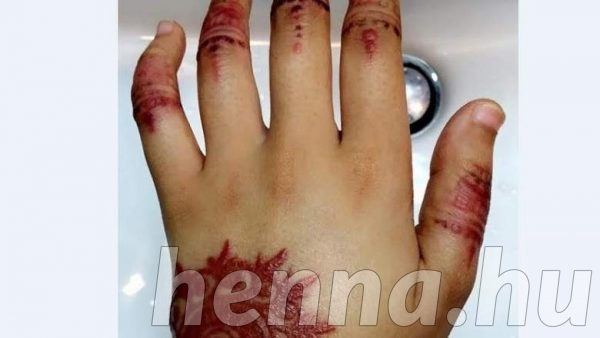 A Sharjah resident has warned residents against using black henna after a casual henna hand drawing during a university event gave her severe burns.

Hala Yasser, whose name was changed upon request, felt her hand burning 30 minutes after she got a henna design, prompting her to wash it off. But as the burning continued, Yasser had to go to the hospital where she received hydrocortisone ointment to apply and antihistamine tablets.

“The henna artist claims that she used red, not black henna. I thought it was dark red henna when she first started applying because I am aware of the dangers black henna could pose, especially when mixed with other chemical substances,” said Yasser.

A week later, Yasser as admitted to the emergency room as her allergic reactions got stronger. “I scrubbed most of the black off even though it was already blistering but I needed to, I was going crazy from the pain.”

She added: “I had to receive two shots daily, I’m on daily antihistamine tablets and painkillers too.”

Given that Yasser is a patient of high blood pressure, she said she started getting bad heart palpitations that prompted doctors to discontinue her hydrocortisone shots.

The burn continued for a week, where she used ice packs every hour to reduce the swelling. “I still find difficulties in bending my fingers because of the blisters. I can’t sleep because it is so itchy and burns non-stop.”

The university confirmed it has launched an investigation on the case.

Meanwhile, Dr Anwar Alhammadi, president of Emirates Dermatology Society, said such allergic reaction to henna is a common problem witnessed in clinics. It goes back to an allergen called paraphenylenediamine (PPD), a chemical substance widely used in hair dye that prompts such reactions.

“We don’t recommend black henna in beauty salons because in most cases, the chemical is added for the henna to last for a longer time. It is better to be avoided,” said Alhammadi.

He noted that before applying black henna, women are advised to test a small area first to ensure they aren’t being lured into a chemical that can develop a harmful reaction on their skin.

Chemicals used to darken henna, that can cause dangerous reactions and burn the skin, have been banned in the emirate.

Sharjah Municipality has prohibited Chinese black henna in the salons as they were mixed with poisonous chemicals that could cause irritation, allergy and skin disease and burns.

The municipality’s inspection continue through surprise visits on ladies salons to detect illegal services provided to customers such as mixing up the henna with harmful chemical.

When the municipality receives complaints from customers about the violation of a salon, women inspectors would be sent to investigate, and if the salon found violating the health regulation, it would receive fine that up to Dh2,000 based on the size of the violation.