You are here: Home / Hír kategória / Fekete henna / Woman has regrets about temporary ‘No Ragrets’ Henna tattoo on chest that won’t go away

A Texas woman vacationing in Mexico decided to get a funny temporary tattoo with her family only to realize her new modification might be permanent.

Reading “No Ragrets” in giant letters across her chest, Ashley Burke says it’s been over a week since she got back from Cozumel and the Henna tattoo is still quite visible on her skin.

“Henna is not black. Never has been black, never will be black,” Burke told KHOU. “If anyone is ever offering you black henna temporary tattoos, it can have lasting effects. 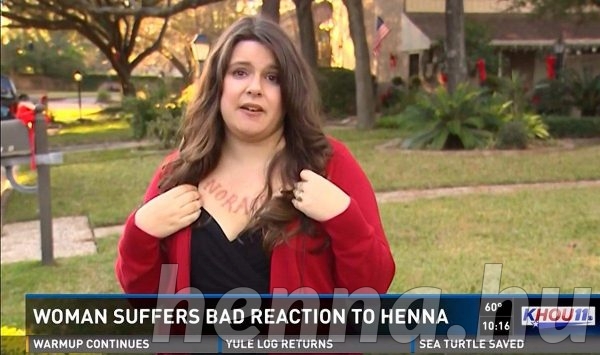 Henna tattoos are only meant to temporarily stain the skin, but Ashley Burke had an adverse reaction to the variety of ink used at her resort in Mexico

“Just protect your family and research everything.”

The FDA specifically warns against “black henna” for temporary tattoos, stating it “can cause dangerous skin reactions in some people.”

The “No Ragrets” tattoo was an ode to a thick-skulled character from the comedy “We’re the Millers,” who openly displays the terrible typo across his upper torso without having any idea a misspelling exists on his skin.

Burke said her family members who got the tattoo experienced reactions too, but their markings have all faded away.

On Wednesday, the resort contacted Burke to apologize as well as to offer to pay for any medical expenses