She was parading her trim body in a skimpy ensemble as she enjoyed day two of Coachella.

Catching some rays: Vanessa was seen carrying a giant yellow sunflower at one point during the day. Beautiful henna on the feet, by the way.
But onlookers would have been wondering how Vanessa Hudgens keeps her tummy so flat as she tucked into a carbohydrate-packed snack on Saturday at the music festival. 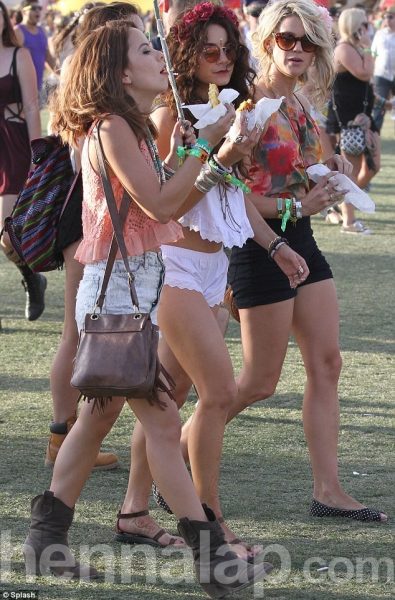 Here come the girls: Vanessa was joined by some female pals at the popular annual festival 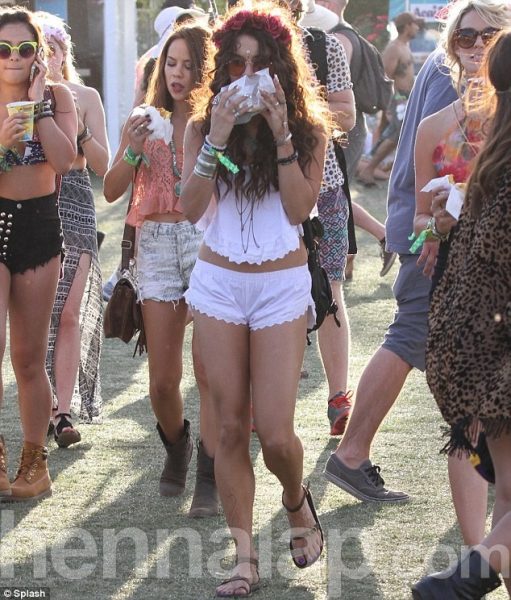 Trim figure: The actress displayed a flat stomach as she donned a pair of tiny white shorts and a matching frilly bandeau crop top. And just look at her feet!
The 24-year-old actress was seen wondering across the lawn at the Empire Polo Club venue in Indio, California and donned her skimpiest gear to cope with the daytime desert temperatures.

Vanessa showed off her legs in a pair of tiny white shorts which she wore with a matching cropped bandeau top, complete with frilly edges.

She topped off her hippy style by donning red circular sunglasses, which co-ordinated with her floral crown headband from Rock N’ Rose in her curly tresses, and a black back pack.

Hippy style: The star sported curly locks and flower headband and she tucked into a treat

Hippy style: The star sported curly locks and flower headband and she tucked into a treat
The screen star accessorised with plenty of bangles and rings, also sporting Asian-inspired body art.

Vanessa perused the gathering with a bindi on her forehead and showed off henna tattoos on her feet as she wore brown sandals. 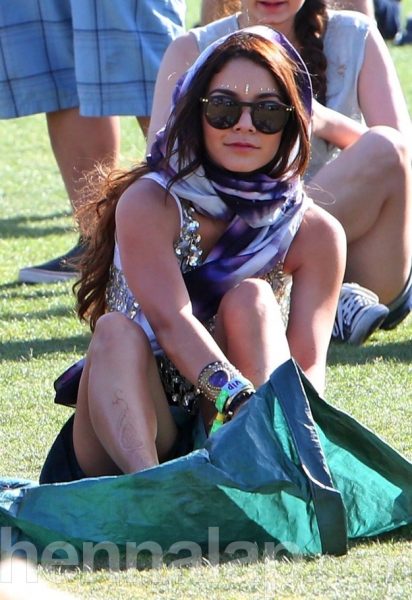 Cultural Appropriation: Check out her bindi and henna
On Thursday she shared her preparation for the festival with followers of her Tumblr blog.

She posted alongside snaps of her beauty work being done: ‘So excited for Coachellaaaa! Spent today prepping w/ henna and nails by Charmed by Sarah. Too legit to quit. What do you think?’ 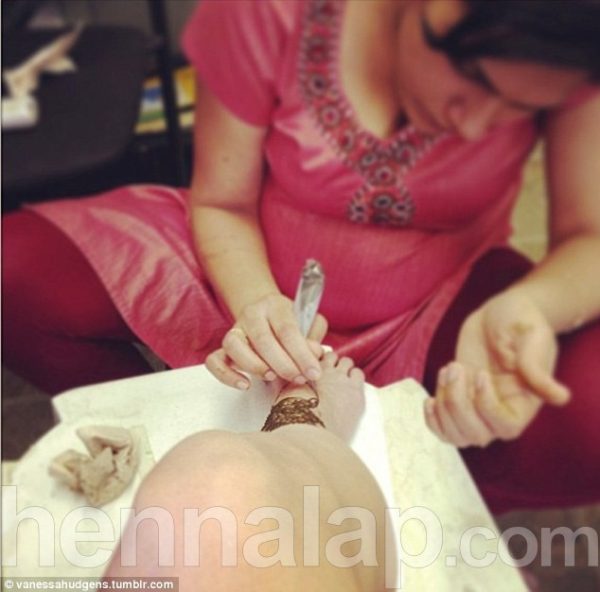 Interesting inkings: She gave fans an inside look at her getting henna on her feet
Vanessa was joined by her actor boyfriend Austin Butler as well as her younger sister Stella and friends.

Later she wore a colourful flowing dress and rainbow sunglasses as she arrived at the Neon Carnival with her beau. 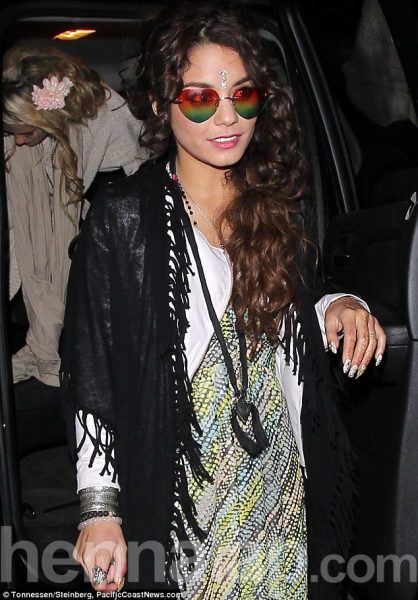 Bohemian chic: Vanessa arrived in a colourful flowing dress, rainbow sunglasses and henna on her hands
The former Disney star teamed it with a tasselled black shawl while her partner wore a paisley printed scarf over his dark denim jacket.

The day before she shared a picture of herself covering up in floral print maxi dress.

The Spring Breakers star captioned her snap: ‘”Fashion shot!!! First day of Coachella down!!! Such an amazing day. The Yeah Yeah Yeahs and Blur made my day. So much fun. Very grateful to have amazing friends to share this experience with.’

The Stone Roses, Blur and Red Hot Chilli Peppers are among acts headlining at the popular annual event which closes Sunday April 21.

Year after year many celebrities flock to the gathering – which is repeated over two weekends – and often frequent the pre-parties and after-parties thrown by sponsoring brands.

Tickets to the first weekend sold out within 15 minutes of them going on sale.