It’s not what she choose as part of her bridal look on the day of her wedding to Prince Edward.

But yesterday, the Countess of Wessex looked on in wonder as a Pakistani artist gave her a pre-wedding henna tattoo.

Although her wedding day is fifteen years behind her, 49-year-old Sophie Wessex looked thrilled with the results of artist Humaira Rehrel’s bridal tattoo.

Sophie, Countess of Wessex gets a henna tattoo from Humaria Raheel as she attends the Heart and Soul garden party held by the Church of Scotland, Edinburgh

All finished: The pattern is a good luck charm
Henna tattoos involve staining the top layer of the skin, with the impermanent effect lasting for up to three weeks.

The reddish-brown colour, which is commonly applied to the hands and lower arms, is dark when first applied before gradually fading.

The Countess had the elaborate tattoo painted across the top of the hand and index finger as part of Heart and Soul in Edinburgh- an annual event that celebrates global religion. 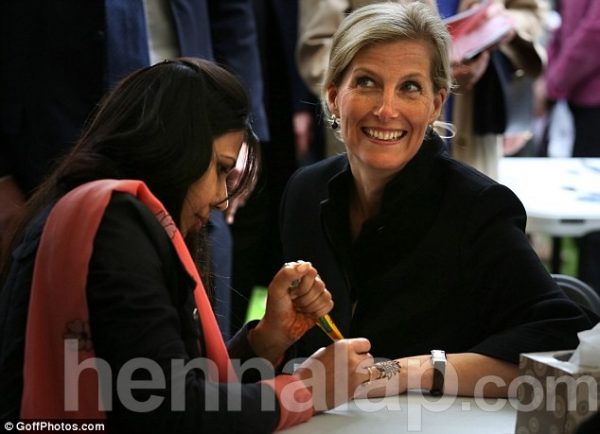 The body art is seen as a symbol of health and good luck in the Arab world and India, where its use is most popular
HRH Prince Edward helped out in the soup kitchen at the event, which is sponsored by the Church of Scotland.

The name Henna derives from the plant which produces the paste used for tattoos.

The body art is seen as a symbol of health and good luck in the Arab world and India, where its use is most popular.

It is often applied to women during rituals before Hindu and Muslim weddings.