You are here: Home / Nyelv / Angol nyelvű / Russell Brand gets a bridal henna tattoo ahead of wedding to Katy Perry

He’s never been one to play by the rules.

So it was no surprise to see that Russell Brand has gone against tradition and had a henna tattoo painted on his hand ahead of his wedding to Katy Perry this weekend.

While it is the custom for the bride to sport the temporary ink on her hands and fingers, it is more than a little unusual for the groom to do so. 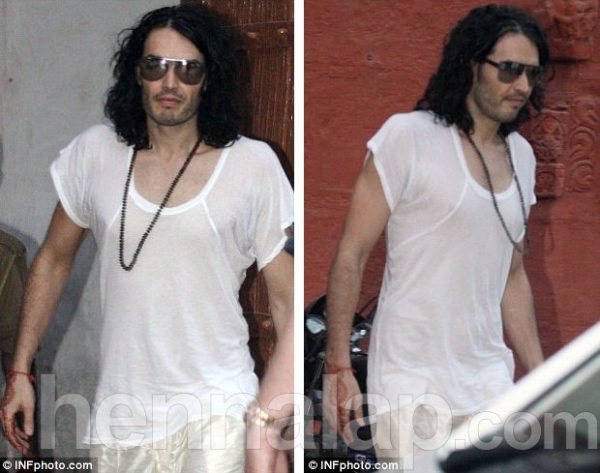 Practising: Russell Brand strode purposefully to the safari this morning, perhaps practising his walk down the aisle ahead of his wedding to Katy Perry this weekend 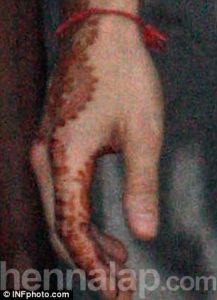 Traditional: Brand stepped out with an Indian henna tattoo on his hand
However, Brand looked thrilled with the intricate design painted on his right hand as he joined wedding guests including David Baddiel and his girlfriend Morwenna Banks on a safari to the Ranthambhore National Park in Rajasthan, India.

But Katy was nowhere to be seen, presumably gearing herself up for the wedding and enjoying preparations including spa and beauty treatments.

The last time the 25-year-old singer was seen was when she and Brand arrived at the airport in India, and the I Kissed A Girl singer was sporting a traditional Indian bridal nose ring.

However, while Katy might prefer to be in private ahead of her big day, comedian Baddiel has certainly been taking in as many of the local sights as possible since arriving in India earlier this week.

Earlier today, Baddiel who accompanied Brand on his stag do to strip club Stringfellows, was seen riding a camel with his daughter at the Hotel Aman e Khas in Ranthambhore, Rajasthan, as Katy’s parents Keith and Mary Hudson watched and occasionally took pictures.

The group were enjoying some peace and quiet ahead of this weekend’s celebration, which will undoubtedly be one of the most glamorous and talked-about affairs since Victoria Adams married David Beckham.

The wedding, which is thought to be costing in the region of £300,000, starts on Saturday with a Hindu wedding ceremony conducted by a local priest at the Sher Bagh resort, a luxury resort outside the Ranthambhore tiger sanctuary in the Indian state of Rajasthan.

According to local tour operator Rajasthan Tours’ manager Mohan Singh, whose company is one of several involved in organising the event, the nuptials are likely to be an eventful and ‘colourful’ affair.

Singh said: ‘This would be a colourful Rajasthan wedding, and both Brand and Perry would be attired in Indian wedding attires.’

The couple, who flew into India earlier this week, have hired 13 vehicles to take some of their 80 or so guests on tours of the wildlife sanctuary in the days after the wedding, Singh explained.

And the celebrations have already started, as Brand and Katy treated guests to a sumptuous Bollywood-style feast last night, which featured snake charmers and traditional dancers.

The Ranthambore National Park, one of northern India’s largest sanctuaries, is best known for it large tiger population, but is also home to leopards, wild boars, hyenas and sloths.

The sanctuary, about 80miles south-east of the city of Jaipur, also includes several lakes and a 10th-century fort.

Brand and Perry will be staying in a luxury tent at the Aman-i-Khas resort, just outside the sanctuary, with guests staying at the nearby Vanyavilas and Sher Bagh resorts, Singh said.

Private security has already been stationed at the hotels, which have refused to discuss the event with media.

However, while the couple are hoping to impress guests with their wedding, the strict Indian laws rule out fireworks, because of the proximity to the nature reserve, and also forbid music to be played after 10pm.

Sawaimadhopur district police chief Vishnu Kan, who said the local police have not been informed about the celebrations, said: ‘We have no clue about the wedding.

‘But we would not allow playing of musical instruments and blaring loudspeakers after 10 in the night.

‘We are bound by the Indian laws.’

Hoping to keep the event details secret, the couple had sent out wedding invitations saying simply that they were getting married in India and the celebrations would last for up to a week.

The singer wrote: ‘TWIT BREAK: Greatest gift you can give us is respect and love during this private time.

‘No use wasting our time with STOLEN or FALSE info. Thank you for this.’

The couple have given the exclusive coverage rights to a London magazine, and no other photographers or journalists will be allowed into the resort.

Guests, who also began arriving in India on Wednesday, are expected to include Barbadian pop singer Rihanna, who is Katy’s maid of honour, and Little Britain star David Walliams.

Also likely to attend is presenter Jonathan Ross, whom Brand joined in the infamous prank phone call to actor Andrew Sachs to boast that he had slept with the actor’s granddaughter. 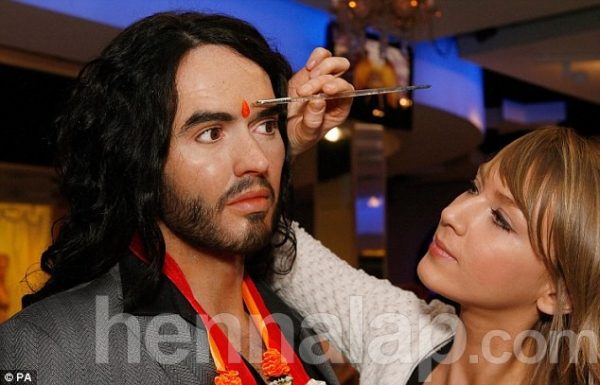 Ross’ representative Gary Farrow said Ross would ‘probably’ be going, but could not discuss it further as it was a private affair.

Meanwhile, back in the UK, Brand’s waxwork at London’s Madame Tussauds has been decked out in traditional Indian wedding gear to mark the occasion.

Staff decorated his brow with a vermilion tilak, a traditional north Indian wedding mark and his tight grey suit was given a vivid makeover with wedding garlands.