You are here: Home / Nyelv / Angol nyelvű / One man’s painful temporary tattoo experience has him warning others

EDMONTON – Craig Irwin has a warning about a certain type of henna tattoo after the one he got while vacationing in the Dominican Republic not only landed him in hospital, but also might leave him with permanent scars.

“Thought it looked really cool at first,” he said of what was supposed to be a temporary sleeve tattoo. “Then within a couple hours, it started getting red.

“It started to feel like a sunburn, and then when it started blistering, I knew that something was wrong.” 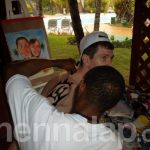 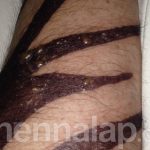 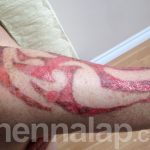 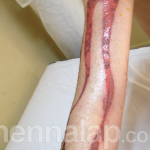 The henna that was used on Irwin was reportedly advertised as being 100 per cent natural and made in India.

According to Dr. Mariusz Sapijaszko of the Western Canada Dermatology Institute, natural henna — which is made from a plant — can be safely used as a temporary dye. Only a small percentage of people will have a reaction to it.

The risk, experts say, is with what is called “black henna.”

“[There are] numerous additives and some of them are certain hair dyes that make it look darker; but the problem is that some of those hair dyes have a high incidence of allergic reaction,” Sapijaszko explained.

He adds that the reaction won’t necessarily be immediate. It can take up to a few days or even a week or two for it to show up. And when it does, the result can range from a painful infection, to more long-term effects such as permanent scarring.

That’s what Irwin is worried about.

He ended up having to undergo surgery at a Dominican hospital to treat a second-degree chemical burn from the black henna that was likely used on him.

“It just looked like they cut the skin off,” he said of the aftermath. “And it was raw and painful.”

Edmonton henna artist Naaila Ali refuses to use black henna on her clients.

“People will bring me tubes of black henna and ask me to get it done. And I tell them I can’t,” she said.

“Nothing about black henna is natural, and I would rather not risk putting that on someone.”

Ali only uses natural henna, and knows exactly what’s in her product: organic henna powder, lemon juice, and a few essential oils, including lavender and eucalyptus.

Her tips for those considering getting henna:

How to tell the difference between natural and black henna:

You can distinguish between natural henna and black henna by the colour, according to Ali. Natural henna has a dark-greenish hue going on and should stain the skin reddish-orange or brown. Ali explains that it can take a good 12 hours to “create a good stain, and even then it takes a few days to oxidize.”

Black henna, as the name suggests, goes on black and fades to a grey.

It may also have an ammonia scent or no scent at all.

The effects of Irwin’s reaction to the suspected black henna are still evident on his arm a month later.

Still, he feels it could have been worse.

“I want to make sure that no one has this happen.”