You are here: Home / Nyelv / Angol nyelvű / Night of Henna – A Collision of Cultures 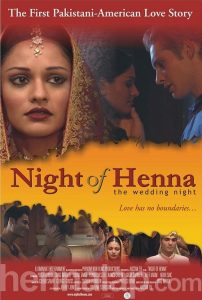 From “The Jazz Singer” to “Bend It Like Beckham” and “My Big Fat Greek Wedding,” the conflict between Old World immigrant customs and modern Western ways has been a staple of cinema, both comic and melodramatic. “Night of Henna,” written and directed by Hassan Zee, contributes to this tradition with more conviction than skill. Broadly acted, clumsily written and directed with crude sincerity, it is a well-meaning feminist morality play unlikely to be of much interest outside the community in which it takes place.

The heroine, Hava (Pooja Kumar, a former Miss India USA), joins her parents and her brother in San Francisco after spending her adolescence in Pakistan, where she was sent to learn proper behavior and to be sheltered from the corruptions of American life. Her father, a grouchy cabdriver, and her patient, self-denying mother have arranged for Hava to marry her cousin (Reef Karim), who has an American girlfriend. Before long, Hava herself, who has (unbeknownst to her father) taken a part-time job in a cafe and set her sights on a college education, is wooed by a hunky redhead named Justin (Craig Marker).

The movie, full of incident, never quite finds its narrative rhythm, and most of the scenes are awkward and overwrought. Though Mr. Zee is clearly on Hava’s side, he throws in a few cautionary glimpses of the depravity that apparently results when traditional values are jettisoned entirely. Hava must find some middle ground between her self-sacrificing, obedient mother, who dutifully massages her husband’s feet and endures his tirades, and Justin’s dissolute landlady, who parades around in her underwear, drunk in the middle of the afternoon.

“Night of Henna” was obviously made for very little money, and its earnest do-it-yourself feeling gives it a degree of charm, which is augmented by Ms. Kumar’s unassuming loveliness. Its insights into both Pakistani and American culture – and into the collision between them – are necessarily superficial, and Mr. Zee’s attempt to marry American-style realism with the big, artificial emotions of Indian and Pakistani popular film does not quite work, in spite of the evident love he brings to the project.