You are here: Home / Hír kategória / Kultúra / My Moroccan Mom Doesn’t Care About White People in Henna, But I Do

I spoke with my mother, aunt, and grandmother—all Muslim, Arab immigrants—to see if there’s more than meets the eye when it comes to cultural appropriation. 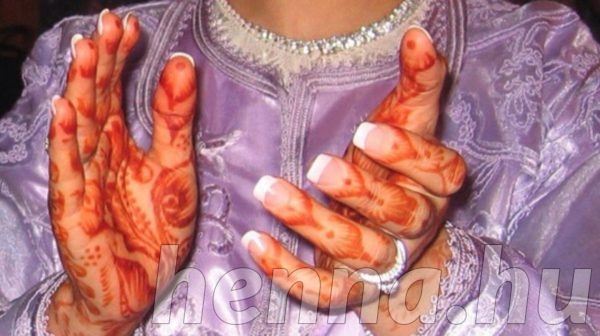 Intricate lines of reddish-brown cover my hands, stopping just past my wrist. The lines make leaves and flowers, dots and graceful corners as they fold over my fingers and onto my palms, where the pattern darkens from sweat. Moisture brings out the pigment. I am in seventh grade and about to get on the schoolbus with my grandmother’s artwork stained onto my skin. A walking gallery. I didn’t see it that way then.

Henna is a dye that’s used to color everything from wool to fingernails. Made from dried henna tree (Lawsonia inermis) leaves that are smashed into a paste called henna in Arabic, or mehndi on the Indian subcontinent, and it’s use has been traced back to at least 5,000 years ago. In that time, the dye has been used traditionally throughout South Asia, the Middle East, and North Africa.

As a kid growing up in Colorado with Moroccan immigrant parents, I loved having henna done. It usually meant that some type of familial event was happening: a wedding, a baby on the way, Ramadan, a visit to Morocco. My grandmother would mix the henna powder with water, let it sit for a few hours, load it into a syringe and get to work on me, my sister, and cousins, tracing intricate designs onto our hands.

Traditionally, henna designs on the hands and feet are only done on women. My brother, not wanting to miss out on the fun, however, would ask for a snake or scorpion on his arm. My grandmother would happily comply. I remember resisting the urge to flake off the dried henna, so that the pigment would have time to darken. When that time finally came, the big reveal of what lie underneath was always thrilling.

But there, on the bus and all day at school, I was torn between pulling my sleeves down over my knuckles and conspicuously applying hand lotion on top of my desk. Lots of things are confusing to pre-teens. But for twelve-year-old me, long before phrases like “internalized racism” made their way into my consciousness, getting boobs didn’t compare to learning how to balance the simultaneous pride and embarrassment I felt towards my henna, which I thought might as well have been a sign on my forehead reading I am foreign. 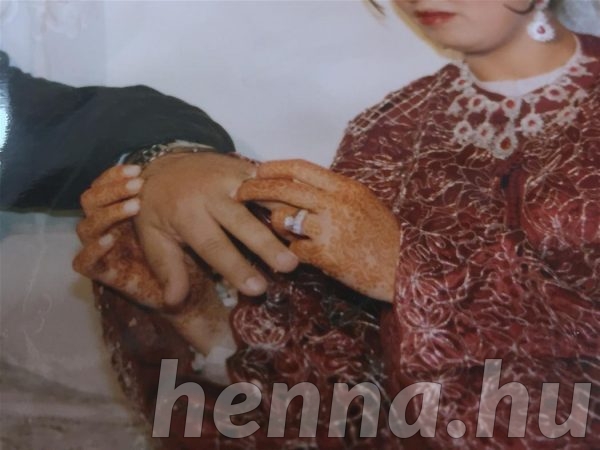 A still from my aunt and uncle’s wedding, her fresh henna visible.

At school, the sincere interest of classmates meant I pushed my sleeves up again as I described the technique and procedure of its application. “Umm… what’s that weird orange stuff on your hand?” however, made me all too aware of the fact that hands are hard to hide, especially while trying to go about your day in seventh grade.

The first time I saw henna on someone who wasn’t from Africa or Southwest Asia was in high school on none other than the Queen of Cultural Appropriation herself, Vanessa Hudgens. I remember feeling flattered. “Okay,” I thought. “Henna is cool now. Maybe I’ll ask my grandma if she can do my henna this weekend.”

Gradually, as henna became absorbed into American pop culture, girls at school began approaching me, asking about the designs. Their tone was noticeably different than it had been in middle school. For a while, these questions were exciting. Asking my grandma if she could do my friends’ henna made me feel important.

That is, until I saw the attention for what it was.

In the years that followed, I would begin to question why my embarrassment towards henna only went away when my white friends acknowledged its beauty. I realized that these same white friends, many of them proud Trump supporters today, had no real interest in my culture or what henna’s significance was for me. They just wanted to look like Vanessa Hudgens and the Jenners. I watched as their henna-stained hands (achieved in a booth at some music festival for a price that almost made me pity them) were met with compliments instead of alienating comments. And as I began to understand cultural appropriation before I had words for it, I started to really hate seeing white girls in henna.

Why was it only cool once they did it? Had they forgotten the times they’d made me feel stupid for wearing it? What changed?

The women in my family, however, remain excited anytime a woman in a movie, ad, or tabloid is pictured in henna. “Look, look at her hand! She’s wearing henna!” my mother, aunts, and grandma never fail to point out, as if she is giving us a personal nod, a silent compliment. I roll my eyes. In the past, I have tried to explain to them why it pisses me off, and while they are receptive, they still perceive signs of our culture permeating America to be a positive thing.

On a recent trip back home to see my family, my mother and I visit World Market, an exoticising but nevertheless charming store that brings the “excitement of global bazaars to you.” My mom picks up an overpriced Moroccan tea cup and kisses her teeth, “they sure know how to steal a design.” The cynical comment is unusual coming from her, and it inspires me to ask again how she feels about white Americans wearing henna.

“I think it’s really cool, because before, they didn’t have a clue what henna was,” she says. “Now, a lot of people are interested in it.” Pressing further, I ask how she would feel if someone who supported Trump’s Muslim ban liked to wear henna. “That would tick me off a little bit,” she replies. “If you don’t like Muslims or Arabs or our culture, why take part in it? You can’t pick and choose.” (While henna is a tradition in cultures beyond Islam and Arabs, that is the group my mother associates it with.)

My mom says that she has never heard the term “cultural appropriation” before our conversation. I do my best to explain it. “That’s sad,” she admits. “Some people make the same argument for henna,” I say.

“I don’t know. I just feel like it’s not something religious, it’s not something that has to do with politics, it’s just fun and I think it should stay this way,” she replies. “I don’t think we should include henna with all this stuff going on in the world.”

Next, I ask my aunt, who I find out is also pretty fine with white people wearing henna. “It might be weird, maybe, at school with kids because kids aren’t going to understand, but I think it’s different with adults,” she says. Last year, after a coworker expressed interest in her henna, my aunt invited her to a henna party at her house. “She loved it,” she says. “When I see [henna] on other people here I think, oh wow cool, that’s something from our culture that’s becoming popular.”

My aunt has a very strong adoration for the art form. “It reminds me of back home, and when I was little and we used to do henna on the 27th of Ramadan. We’d get dressed up and do our makeup and we felt so special,” she tells me. “Every Ramadan, I put my daughter in a Moroccan dress and try to do it like we used to and give her the feel of it—she likes it too.”

After speaking to my mother, aunt, and grandmother, who all had similar feelings about white women in henna, the reason for the difference between my views on the topic and theirs is clear: our experiences with henna have been vastly different. When they went to school with it, they received comments like, “Congratulations! When is your sister due?” or “Eid Mubarak!” They never had to defend their henna—they were never forced to make it political.

As Muslim immigrants in America, my mother, aunt, and grandmother have had to defend and tolerate far more bullshit than I have, and unfortunately anti-Muslim sentiment and hate crimes in America continue to rise at an alarming rate. While I have to wear henna, speak Darija (Moroccan Arabic), or go outside in a jellaba to appear foreign—the women in my family are seen as such simply by existing. If they want to keep henna—a tradition they associate with wonderful memories, one that makes them feel at home—free from the aggression and negativity they put up with every day, I can learn to be okay with that.

I can accept their opinions based on their own experiences without denying myself of my own, because I will never be excited to see a white girl in henna.