The rumors are still floating around about Katy Perry’s possible engagement to boyfriend Russell Brand, but whether or not she can call him her fiancé, she certainly has been enjoying her getaway with him. The pair have been traveling around India for the past few days, and Perry has been keeping her fans abreast of the latest vacation developments via her Twitter page.

“He built this for me,” Perry wrote on her Twitter, a message accompanied by a photo of the pair embracing in front of the Taj Mahal. She followed that up the following day with the message, “In India, the motto is you gotta go with the flow.” She also marveled at the country’s meeting of exotic animals and technology. “Mercedes and elephants side by side!” she tweeted on New Year’s Eve. 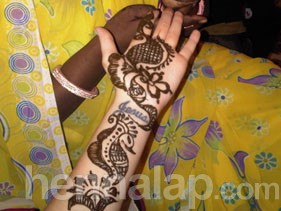 Katy Perry tweeted this photo of her henna tattoo
To celebrate the end of 2009, Perry treated herself to a henna tattoo (which happened to wrap around the tattoo of the word “Jesus” she already has on her wrist). She snapped a photo of the process and wrote, “I’m typing this with one hand. Isn’t it lovely? It’s henna!” She then wished everybody a happy new year, and later gave a shout-out to some friends in Los Angeles. “Just so you guys in L.A. that are about to experience 2010,” she wrote. “It’s noon on Jan 1st here in the future, let me tell you 2010 is bumpin!”

Perry’s most recent dispatches include a photo of a cow (with the caption “Holy Cow!”) and a note that peacocks make noises that a very similar to cats. It’s not certain how long she’ll be out of the country, but she’ll have to return sooner or later to prep the release of her second album, which is completed and awaiting a title. Brand also has a high-profile project happening in the new year, as “Get Him to the Greek” — the movie that revives Brand’s rock star character from “Forgetting Sarah Marshall” — will be hitting theaters in June.