One of the reasons I started my website is that I wanted a place for women to come together and dream. We women need to know that we don’t have to hang on to an old dream that has stopped nurturing us — that there is always time to start a new dream. This week’s story is about an Indian woman who dreamed of bringing henna to the United States, but chose to work on Wall Street for financial stability when she finally came to NYC. Sandy did henna on the side until she tested her talent in a whole new format — edible artistry. Today, her cakes, cookies and macaroons are wildly popular in the dessert world and regularly appear at celebrity-filled events. -– Marlo, MarloThomas.com

By the age of two, Sandy Patangay had already found her calling. It all began with an innocent moment, when her mother was trying to keep the young girl occupied. She gave her daughter a tiny bowl of henna — a dye commonly used for artistry in her native India — in lieu of crayons, and let the budding designer go to work. What she couldn’t have known was that she was setting the stage for a sweet career that would one day catch the eye of America’s top tastemaker.

“In India, henna is a big part of our culture,” Sandy explained. “When my girlfriends would come over, we’d play with it in the same way American girls would play with make-up. It’s also a big part of wedding ceremonies. You’ll see the designs on the bride’s hands and feet. And often there is an artist there, doing henna on the bridesmaids and guests.”

“We’d go to family weddings and from the moment I saw the henna artist, I wouldn’t leave her side. I’d sit there for hours. My mother would say, ‘You’ve wanted to play with your cousins all this time and now you just want to sit with this lady?’”

And while her family coaxed her to concentrate on her math and science studies, somewhere in the background, there was always a book of henna artistry which, in her spare time, Sandy would work hard to replicate.

“When I decided to come to the United States,” Sandy said, “I told my friends I’d do something with henna. I thought I’d be the one to introduce henna to the American culture! But when you come as a new immigrant, you quickly forget about those dreams. You’re simply in survival mode. I knew that working in IT would give me job security, so I concentrated on getting my masters degree.”

But on the weekends, Sandy would make time to explore her new home. And one day, as she was in the back of a taxi, driving through New York’s Chinatown, she saw a sign that spoke to her.

“It said henna tattoos! I jumped out of the cab right there in the middle of Canal Street. Here I thought I’d be the one to bring henna to America — and I couldn’t believe it was already being done!” 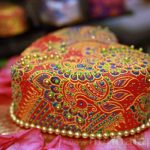 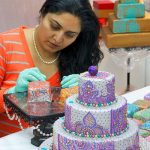 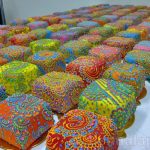 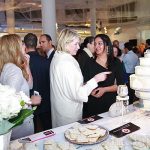 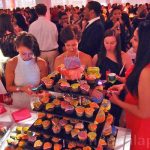 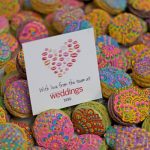 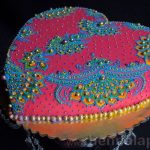 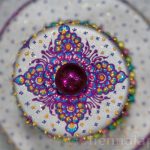 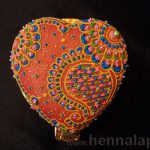 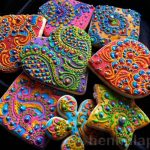 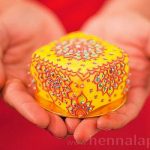 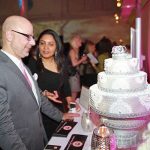 But what she quickly discovered, was that it wasn’t being done often enough. After waiting twenty minutes, for the artist to appear, the manager came out to say that she only worked by appointment. Sandy took the opportunity to sell herself and two weeks later, she got a call that would change the course of her career. New York’s Museum of Natural History was holding a three-day event celebrating body art and the manager who she had met so serendipitously, wanted her to come along and demonstrate her skills.

“I just couldn’t believe I was going to get to do henna and get paid too! I was still new to New York, so I had no idea how big this event or the museum was. But from start to finish, I was the busiest person there. I did hundreds of hennas.”

It was the beginning of a beautiful relationship. Sandy continued her schoolwork, but would do henna designs on weekends — for private clients in the Chinatown studio and for major events around the city. And even as she launched a career on Wall Street, she had customers lining up — patiently waiting for her to find some free time.

Some might say it was the icing on the cake, of her already successful career. But there were others who suggested, that maybe it actually should be.

“People kept telling me what a steady hand I had,” Sandy recalled, “that I should be a surgeon or a cake decorator. It made me curious. I couldn’t just walk into an operating room, but I could buy the supplies I needed to try my henna designs on a cake.”

So Sandy picked up a simple white canvas at a local bakery — a cake topped with a sugar fondant, which created a porcelain-like finish. And then she went to work — creating a stunning mix of design and the vibrant colors of her heritage, intertwining sugar beads and gold dots with each step, and when she was finished, she had an edible work of artistry.

“And I thought that was that,” the colorful artist said. “I’d proved to myself that I could be a good cake designer. I took a few pictures and just added them to a slide show that I bring with me to events, so people can see what’s possible.”

The possibilities were exactly what caught the eye of a food blogger, who just happened to be at a baby shower where Sandy was invited to do her designs. The writer couldn’t wait to show her audience of foodies her latest find. And suddenly, Sandy’s little experiment went viral. Everyone wanted to know where they could buy the scrumptious works of art.

It was 2011, and Wall Street was on shaky ground. Many of Sandy’s colleagues were concerned about their careers — wondering what they might do next. And at that moment, the designer who’d limited her artistic endeavors to weekends, knew it was time to pursue her dream. She was going to bring henna to America — but in a way she’d never considered.

By day, Sandy continued to work in the financial district, but used her spare time and her project management skills to test market her idea with her target audience — event planners that were already inviting her to work at their high-end affairs.

And while the smart entrepreneur approached her new endeavor with caution, it only took one taste, for her cakes to rise to the top. One of those event planners had shared Sandy’s edible artistry with Martha Stewart’s editorial director.

“My website wasn’t even complete yet,” Sandy said, “and we were going to be featured on Martha Stewart’s wedding site. I thought, even if it crashes, people will email us. I’d just better take it live!”

So before she even had an official business, Sandy had customers — lots and lots of customers. She signed a lease on a design studio in lower Manhattan and the company she named Crème-Delicious took off. But the best was yet to come. Martha’s team was so impressed with Sandy’s skills, they invited her to sample her work at an event so big, it’s been called the Fashion Week of the bridal industry.

“Six months prior, I was worried that I’d spent too much money on my website and there I was, with cake designers like Ron Ben Israel and Sylvia Weinstock and they wanted to take my picture. I started getting emails from fashion designers and Gail King wanted to feature the cakes as one of her finds in O Magazine.”

It wasn’t long before Sandy expanded her edible artistry empire to include cookies and macaroons and her Crème-Delicious creations were being ordered from as far away as Dubai — and of course, by Martha, herself. This Valentine’s Day, Martha Stewart sent more than 2,000 Crème-Delicious macaroons, as a sweet thank you, to her clients.

And now the former Wall Streeter has her sights set on New York’s fashion district — as she begins discussions with a well-known designer about to launch a line of very sweet treats.

“So many times,” Sandy said, “I asked myself, whether this was a stupid move — walking away from a secure job to sell cakes. But now I can see I didn’t waste a single day. While I loved what I was doing on Wall Street, there’s only so much you can do to climb the corporate ladder. And how many people actually end up being the CEO? But when you follow your passion, the possibilities are endless.”