Brothers from Druse village had tattoos painted on their arms while on vacation in Eilat; while now better, they still suffer from rashes and itching. 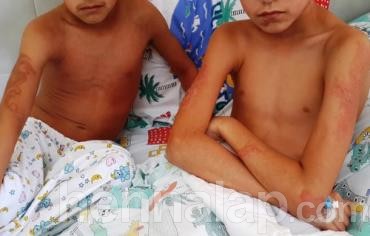 Alergic reaction to black henna
Two boys from the Druse village of Beit Jann in the Galilee were hospitalized last week after they were given black henna tattoos at a kiosk in Eilat during a family vacation.

The parents of the boys, brothers aged eight and 12, took them to Ziv Medical Center in Safed suffering from serious allergic reactions that included blisters on their hands. They were treated in the emergency department with steroids and anti-allergy drugs. The younger brother was discharged first, but then brought back two days later because his allergic reaction spread. The older boy was hospitalized in the pediatrics department for a week’s supervision.

Their conditions have improved, but they still suffer from rashes and itching and have difficulty falling asleep.

The Health Ministry warned the public on Sunday against the dangers of black henna and recommended it not be used for tattoos. Reddish- brown henna ink – made from natural vegetable pigments – is widely used cosmetically in the Middle East and Far East. But in order to preserve the color, tattoo artists add PPD, a black chemical.

PPD is an industrial allergen forbidden in Israel. Nevertheless, it is used in tattoo kiosks and at fairs. Allergic reactions can sometimes end in permanent scars.

Dr. Dana Krupnick, head of Ziv’s pediatric emergency room, said that henna tattoos – quite common in the adult Druse and Arab population – are seemingly harmless, but they can cause a non-permanent acute allergic reaction and contain chemicals that are also used in the rubber and pharmaceutical industries.

The Krupnick warned that the next the brothers encounters henna their reactions may be worse, because then their bodies will “remember” the allergen and reaction could be much worse and even fatal.